Curbed Awards ’13 Architecture: The Good, The Bad, The Ugly! | HAP

Curbed Awards ’13 Architecture: The Good, The Bad, The Ugly! 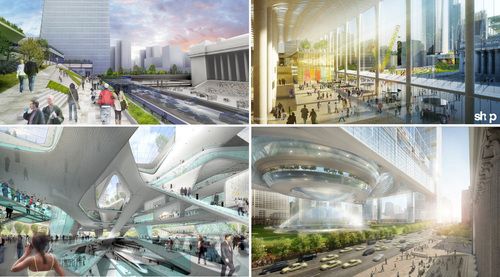 It’s time to make up a bunch of awards and hand them out to the most deserving people, places and things in the real estate, architecture and neighborhood universes of New York City! Yep, it’s time for the Ninth Annual Curbed Awards! Up now: architecture.

Best Building We’ll Never See
The pure hypothetical competition to dream up a new Penn Station whipped everyone into a frenzy, with star firms SHoP Architects, SOM, H3 Hardy Collaboration Architecture, and Diller Scofidio + Renfro submitting pie-in-the-sky plans. They’re beautiful, and worth a deeper look, but will Madison Square Garden ever move? Will funding ever be found to remake the embattled, much-maligned transit hub? Perhaps no, but just ogling the futuristic designs is pretty fun, too.

The Casting Shadows Award
Despite its shameful loss to Governors Island in the Curbed Cup, you can’t mention 2013 and real estate without throwing 57th Street in there in the same breath. The giant towers that have risen/are rising/will rise along that thoroughfareOne57, the Nordstrom-based tower at 217 West 57th, JDS’s tapering-topped 107 West 57th, and Macklowe’s very square 432 Parkwill all be tall, to be sure. They’ll all cast shadows over Central Park, but which one truly deserves to be that tall, architecturally speaking? (Frankly, we’re holding out for Bjarke Ingels’s pyramid, but that’s too far west to cast any shadows.) Check out the photos and cast your vote.

Most Mindboggling Rendering Reveals
6) SHoP’s 50-story tower for South Street Seaport. Plus new looks at a totally revamped Pier 17. The Seaport is a-changing.

5) The First Avenue Mud Pit will be no more! The site will instead house two luxury rental towers, which arch towards each other and are connected by a sky bridge. Yes, SHoP also designed these. And there’s an infinity pool, pictured above.
4) The Rockwell Group- and Diller Scofidio + Renfro-designed, High Line-abutting Hudson YardsCulture Shed will look like this crazy thing.
3) Somewhat new to the scene, developer Blackhouse wants to enter with a bang. With a 27-unit development in West Chelsea that boasts a sleek black facade and apartments with private pools.So a big bang.
2) After years of waiting, Manhattan’s largest swath of undeveloped land below 96th Street will become mixed-use megaproject Essex Crossing. A bevy of renderings tell us it’s not going to beSPURA for much longer, Toto.
1) No surprises here: Two Trees’ unveiling of the new SHoP vision for Williamsburg’s Dominosugar factory made everyone’s jaws drop.

Most Exciting Born-Again Building
We’ve gotta give this one to Jean Nouvel‘s MoMA neighbor-to-be Tower Verre, which was resurrected this year thanks to a $1 billion cash infusion. Sure, it’s another 1,000-foot-plus building, but its top is neat.

The Fad Du Jour
In 2013, everyone went wild for prefabricated compartments getting stacked on top of each other to make cost-effective modular buildings. Here are five examples.
5) Lehman College’s daycare center by Garrison Architects
4) Rockaway’s new comfort stations, also by Garrison
3) Inwood’s 28-apartment condo building, Broadway Stack (seen getting stacked above)
2) Pier 57uh, excuse us, SuperPiera not mall that really looks like a mal, and part of it will be made out of “incuboxes” a.k.a. shipping containers
1) Atlantic Yards’s first residential tower, B2, whose units started to pile up late this year

The “Hey, You’re On 57th Street And Not Ugly” Prize
Roman & Williams industrial-chic hotel, Viceroy New York, is actually rather lovely. The face is made of black brick, metal, and glass. And it’s not 10 million feet tall.

We Rock So Hard At Historic Preservation Award
2) Corbin Building: Down by the transit hub-in-progress Fulton Center, the newly restored Corbin Building has stolen the show. The exterior restoration of the historic 1888 building is complete, and the facade’s brick, stone, and terracotta structures reveal the meticulously carved ornamentation. Plus, honest-to-goodness artifacts have been found underneath.
1) Williamsburgh Savings Bank: The historic bank building that Brooklyn hostel owner Juan Figueroa is converting into an event space/banquet hall (with a hotel next door) has undergone a careful restoration. The space itself is simply stunning, and the painstaking spiff-up has left it in great shape for 2014.

Most Activist Archicritic
The Times‘ Michael Kimmelman left the ink-stained tower of journalism this year, using his column not just for abstract criticism but also as a vehicle to press for actual change in the cityscape. A Penn Station hater who also came out against Midtown East rezoning and the towering goliaths of 57th Street, he did like Annabelle Seldorf’s recycling plant and BIG’s “humongous Tostito”-shaped pier for Brooklyn Bridge Park.

Most Poetic Archicritic
This award obviously goes to the architecture writer whose analyses we always excerpt and turn into verse. Thanks, James Russell of Bloomberg, for putting up with it.

Archicritic With The Most Amazing “First Apartment In NYC” Stories
Trick award. It’s all of them! At least all the ones we interviewed about their first New York City rentals. Turns out that even the urban-savvy in our midst had pretty seamy early residences.

The “Oh My Gosh Finally” Award
After proving her mettle around the world, at long last, Zaha Hadid is gracing New York Citywith one of her curvaceous buildings (above). 520 West 28th Street overlooks the High Line and will contain 37 homes that will in all likelihood be very, very expensive.

Most Prolific Firm Of The Millennium
Despite its bizarre penchant for capitalization, SHoP Architects continues to design every building in New York City. Not an exaggeration.

We Design Parks Better Than Anyone Else Award
2) With involvement in the East River Blueway, the proposed High-Line-of-Queens, and Transmitter Park, WXY Architecture has made a name for itself in the outdoors.
1) As Brooklyn Bridge Park continues to flesh itself out with exciting expansions and improvements, landscape guru Michael Van Valkenburgh and his crew have stayed at the head of the pack.

Zaniest Architect Of The Moment
In addition to designing a wild-looking angular building for East Harlem (rendered above) and his own neon-dotted, playfully patterned loft, funktastic designer Karim Rashid is also behind Washington Heights project that, wait for it, will have a checkered purple facade with Tetris-like windows. Because Karim!

Most Classic But Not Boring Architect Of Our Time
He’s far from new, but that’s sorta why 15 Central Park West architect Robert A.M. Stern should get an award. Because given the degree of extremity shown by some of his contemporaries, say, Karim Rashid, and the lack of imagination shown by others (ahem, fill-in-the-blank skyscraper), this veteran deserves a bit of credit for staying old-school.

Most Extreme “Extreme Makeover” Plans
5) With the least amount of fanfare ever, Madison Square Garden finished its $1B renovation. Maybe because the outside is still ugly?

4) The Queens Museum‘s $69 million renovation left the facade aglow with color and added an atrium. Nice to see a project in Flushing getting this kind of aesthetic attention.

3) Architect Adam Kushner wants his Minetta Lane house to have a super out-there diamond-gridded facade that’s also kinda porous. Naturally, there will be a climbing wall and a waterfall.

2) The renderings aren’t mindboggling or anything, but picturing Governors Island with a day spa is pretty extreme.

1) The gas station at Houston and Lafayette is going to be a glassy office/retail complex(rendered above), and if you can believe it, the Landmarks Preservation Commission was totally smitten with the modern design… even though it’s Soho. A miracle.

Ugliest Extreme Makeovers
This Harlem house combo and an unfortunate hotel makeover in Kips Bay are just plain sad. Architects, don’t do this to our streets.

Hot Karl Award For Continued Crappiness (And At Least One Semi-Success)
The most prolific architect of blah buildings in the city, Karl Fischer, continues his streak. Despite some decidedly ugly additions to the city’s residential options, there is perhaps one redeeming project that spawned from his brain: 101 Bedford, the Williamsburg mega-rental withamenities up the wazoo. This ‘Burg building ain’t so bad either. Will 2014 bring more Hot Karl designs that actually live up to his nickname?

The Architect Who Refuses To Go Away Award
Barred architect Robert Scarano refuses to be stymied. Not only has he tried for comebacks as a “conservationist” and green architect, he has also been caught editing his own Wikipedia pagetwice. What more? He has a disciple: Nataliya Donskoy. Let’s hope her work won’t all look like this.

Losing Our Religion Award
Residential needs seem to be supplanting religious ones, as church-to-condo and church-to-rental conversions become more and more ubiquitous across the city. The bad news? Some are just hideously ugly. The disastrous duo of developer Brookland Capital and architects Isaac & Stern came up with the two monstrosities above; one in Bushwick, the other in Crown Heights. Shudder.

The “How To Lose Your Inhibitions Each And Every Year” Award
Governors Island’s annual quest for weirdness involves a bunch of architecture firms vying to compete to build an out-of-the-box pavilion for the summertime Figment festival. This year’s winner, by New York-based CDR Studio, will grace the isle in 2014, with their design of “used plastic cups, saved from discard from throughout the city, are bound by zip-ties into a densely-knit serpentine structure.”

[4WTC photos by Will Femia.]

Building of the Year
Several critically lauded structures opened their doors in 2013, from Steven Holl’s many-layered, metallic “architectural chameleon” at Columbia’s Campbell Sports Center complex to Prospect Park’s “stealth” Lakeside ice rink and leisure complex by Tod Williams and Billie Tsien that reclaims “Brooklyn’s pastoral heart.” Not many were residential, thoughthose are all under construction or merely in the rendering phaseexcept for blockbuster comeback development One Madison, whose BKSK Architects-designed fast-selling tower , while capturing the zeitgeist of a bonkers sales year, with its $50M triplex penthouse and celebrity magnetism, doesn’t quite have the aesthetic gravitas a BOTY requires.

So this year, the honor goes to Silverstein Properties’ 4 World Trade Center. The first of the World Trade Center sites to be complete, it opened in November to much acclaim from a chorus of archicritics. “A deft, thoughtful and well-made piece of architecture, so quiet that it almost seems to recede from view,” according to the Los Angeles Times. Per the Chicago Tribune: “[T]hesubtle, self-effacing high-rise compels with its combination of sharply-honed, light-reflecting minimalist geometry and sensitive, city-embracing urbanism.” One of Design Boom’s top 10 towers of 2013, the Times‘ David Dunlap raved, too.

Maybe it’s that the building performs the same consoling magic on the site’s violent history as hospital corners and gleaming uniforms do: It neutralizes gruesome memory, substituting violence with order.

Masterminded by Japanese architect Fumihiko Maki, he said upon its opening that the goal was “a ‘minimalist’ tower that achieves an appropriate presence, quiet but with dignity, and a ‘podium’ that becomes a catalyst for activating the surrounding urban streetscape.” The Architectural Record joins the chorus of praise: “From outside, you’re looking at reflections, and from inside, you’re still looking at reflections. It’s hard to think of another building that so fully erases itselfan admirable act of restraint by Maki, a Pritzker Prize-winner.” Congratulations are in order, then, for it seems she has succeeded. Onwards to the new buildings of 2014.