Brokers who can sell anything, even a multi-colored house | HAP

Brokers who can sell anything, even a multi-colored house 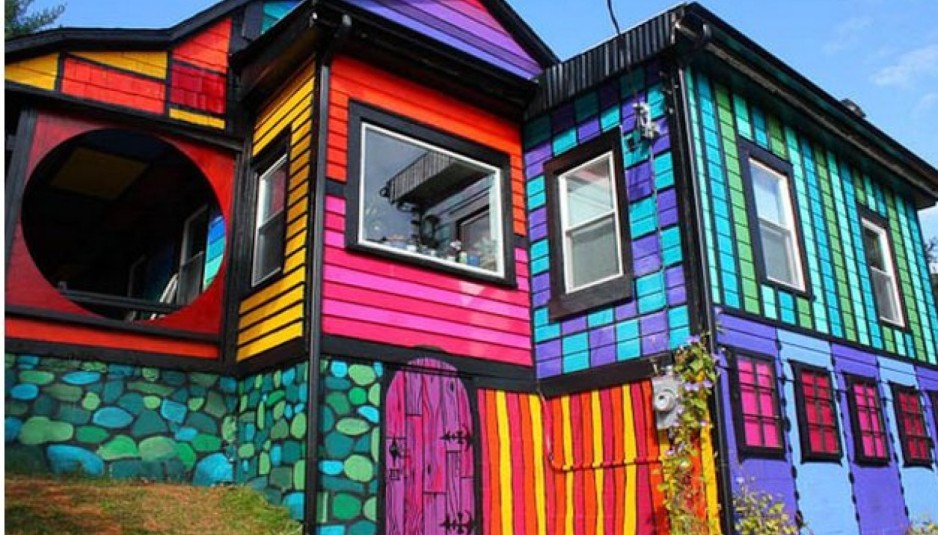 It’s not hard to blend in in New York City. With eight million people milling about in one of the world’s largest cultural melting pots, even the most unique amongst us are just a small piece of a very diverse fabric.

But what about properties that manage to stand apart from the vibrant metro landscape? Do homes or buildings that fail to match their surroundings provide a challenge for those trying to sell them, or do their unique appearances help them attract buyers as well as attention?

Claudia Saez-Fromm, a salesperson at TOWN Residential, was charged with selling the famous “Black Apartment” in Chelsea alongside fellow TOWN associate, her husband Mark Fromm. She told Brokers Weekly that selling the one-of-a-kind properties presented a rewarding, but hard to navigate endeavor.

“It was a challenge,” said Saez-Fromm. “Even though it’s a beautiful apartment, it was very taste specific.”

You may recognize the “Black Apartment.”

Located at 213 West 23rd Street, it has been featured in New York magazine, an episode of Law & Order, and a Notorious B.I.G. music video. And Saez-Fromm has it under contract for $4.5 million.It has a 20-by-68-foot great room lit by five oversized south-facing windows. It also has a sleek open kitchen outfitted with stainless steel appliances and a wall-length built-in bookshelf.

The stylish master bathroom has a deep soaking tub lined in sleek black tile, and there is another full bathroom plus a powder room.

With its excessively dark décor and exotic accents, it may not appeal to the average buyer.

“There were some art collectors that loved it but they couldn’t get their partners to like it,” said Saez-Fromm, recalling the struggle of unloading a far-from-cookie cutter home.

“We had couples that could not agree on it,” said Saez-Fromm. “The people that are definitely interested are going to be gutting it to their taste because it’s actually the best deal on the market right now in Chelsea.”

In order to help move the property, Saez-Fromm had renderings drawn up of the apartment after it had been white-washed.

The digital images allowed potential buyers to picture the home as a clean-slate for them to work with.
“The upside of this apartment is that you get to design it the way you want to. The current layout really doesn’t need a lot of work aside from a paint job,” she said.

Why not just adjust the property beforehand if it’s going to market? Saez-Fromm said that, in this particular case, the exotic look of the residence represented the “owner’s identity” and they could not bring themselves to alter it until it was no longer their own.

Rich currently handles properties at 45 Sutton Place South along the East River, which has a mural in the lobby that depicts images of the river.

“They were going to take that mural and change it into a waterfall and most residents in the building were in an uproar. Now the mural is staying there,” Rich said.

“It turns out that everyone really wanted to keep (the mural),” he said, pointing out that even though the waterfall may have been a bit more modern and perhaps aesthetically pleasing, the unique look of the original painting had endeared itself to a bulk of the residents.

“It meant a lot to a lot of people in the building,” said Rich.

“There’s always different strokes to different folks. There’s people who love the modern buildings with the glass windows and walls and people that love the pre-war apartments. I always think that when somebody does something that’s out of character for the neighborhood it stands out like a sore thumb,” continued Rich.

“But there’s always somebody that gravitates to that.ˮ

Though like Saez-Fromm, he admits those unique properties can be a hassle at time. “I find (them) harder to sell,” said Rich.

The brokers agree that while an exotic home may not attract a high volume of serious home-shoppers, it can still draw a pretty-penny from the smaller pool of bidders that find their way to it.
Amir Hassid, chief investment officer of HAP Investments believes very strongly that a building’s value is positively impacted by a unique but functional look.

“Whenever possible, HAP looks to elevate the standard of residential design while complementing the existing context of the neighborhood architecture,” Hassid said.

HAP has built, or is in the process of building, nearly a dozen New York City developments, each attracting media attention for its design, be it a shattered steel facade that bears a striking similarity to the Olympics bird nest that the Chinese built (HAP 6) or a pink and green edifice shaking things up in East Harlem (HAP 5).

The offbeat but trendy exteriors were designed by Karim Rashid, a designer described by Time magazine as the “most famous industrial designer in all the Americas.”

Rashid calls HAP 4 in Inwood “Lilakˮ and says that, like all of his designs for the developer, it embraces “the democratization of design, or what I call affordable luxury.

“With new technologies and smart solutions as well as the new changing global contemporary sensibilities everyone can afford and desires high quality, high design, high aesthetics, and high performance environments.ˮ

The neighbors weren’t quite ready for the neon-inspired HAP 5 at 329 Pleasant Avenue so the developer gave them a chance to select their own exterior color-scheme in what was a first for the New York City development community last year.

“HAP has found that a well-planned non-conforming design will sell or rent faster than a building that simply follows a conventional approach, and will perform better in a down real estate market as well as a strong market,” said Amir Hassid, noting that HAPO is preparing to start work on it’s biggest project to date, a $400 million residential tower in Jersey City, slated to rise 42 stories.

With business booming, it seems that while in New York it may be easy to blend in, if you find a property that speaks to you, standing out might be the way to go.