What Color is Your Balcony? Developers Give East Harlem Neighbors a Vote | HAP

What Color is Your Balcony? Developers Give East Harlem Neighbors a Vote 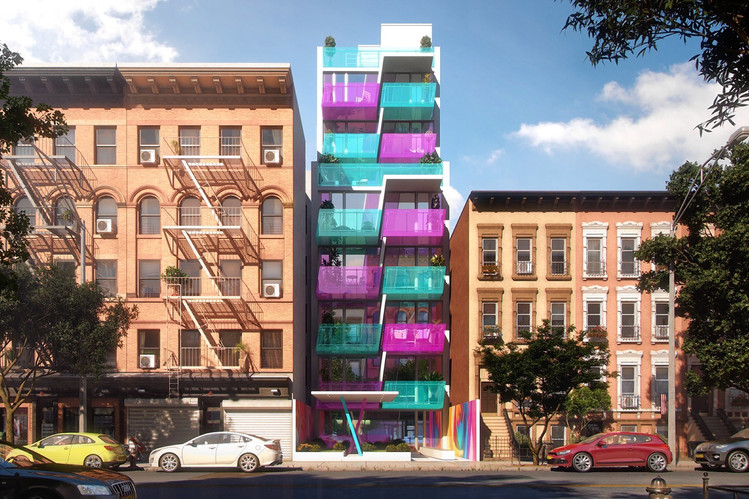 More than 30 neighbors showed up at a temporary polling place at 329 Pleasant Ave. in East Harlem yesterday to vote on five proposed color schemes for a controversial new eight-story apartment building.

Developed by HAP Investments, it’s being built on an empty lot. “This is a vacant site, so obviously a building belongs there,” said Alex Herrera, director of technical services at the New York Landmarks Conservancy. “Having a building built where one belongs shouldn’t upset anyone. I think what is upsetting people is the design.”

After residents voiced concerns over the building’s color scheme – glass balconies tinted pink and green– and complained that it didn’t fit on a block of pre-war buildings, HAP Investments, developers of the building, offered to let locals vote.

The company “felt the poll would enable residents to voice their opinion on the color choice,” CEO Eran Pollack said through email.

Since September 23rd over 250 people have voted on the issue, HAP said, including online voters and yesterday’s in-person voters.

A local resident voting on color schemes at 329 Pleasant Ave .

“It’s a small step in the right direction but it’s not enough”, said Monica Seale, 43, a self-employed non-profit worker who was walking by the polling site.

“I am all for being modern and being with the times, but to be so garish and put loud colors” was a mistake, she added.

Herrera believes the community board members may apply for the neighborhood to be landmarked, which could become more difficult with a contemporary building mid-block. “I think if it goes up as the drawing shows it, it would definitely make chances less likely,” Herrera said.

Some voters grumbled even though they participated. “Having you pick a color swatch is not meaningful feedback,” said Hantz Serrao, 43, a financial advisor who was walking past and stopped to vote.

Color is only one of many complaints about this development, said Assemblyman Robert J. Rodriguez, of the 68th district “I think they are taking one minor issue and attempting to put it out there as if it’s the entire problem,” Rodriguez said.

This development has garnered attention not only because of its tinted glass but also because it is set far back from the sidewalk. “The lot is very deep; it’s unusual for development sites,” said Eldad Gothelf, vice president of planning and government relations at HAP Investments, at the polling site.

The decision to build so far back was an economic one, Gothelf said. The building had to be set far back, or “the building wouldn’t be built, it wouldn’t make economic sense. We would lose too much.” Prices for rental units have not yet been set.

Building lines in old neighborhoods create a sense of place, Herrera said. Rodriguez stated that HAP Investments has a right to build at the East Harlem location, but doesn’t have a right to disrespect the community and ignore its complaints.

But even with its eccentric architecture, not everyone dislikes the design. “One of the things that makes New York a really cool place to live is that there are different styles of buildings meshed right up against each other,” said Stephen Black, 48, who lives in the building adjacent to 329 Pleasant. “I personally like it when there is a juxtaposition of styles.”

Other voters had similar reactions. “It’s different, just like the one across the street,” said Cary Gonzalez, pointing to another modern building on 118th street. “I like it,” she said.

Having a poll is unusual for HAP Investments, said Gothelf, but was a way to say, “we are in the community, we’re not just here to get in and out.”

With developable land scarce in New York, listening to neighbors is a must, Herrera said. “In New York, you need to be a good neighbor.”

Online and on-site site voting will continue today. Results will be announced next week.