In the News | HAP 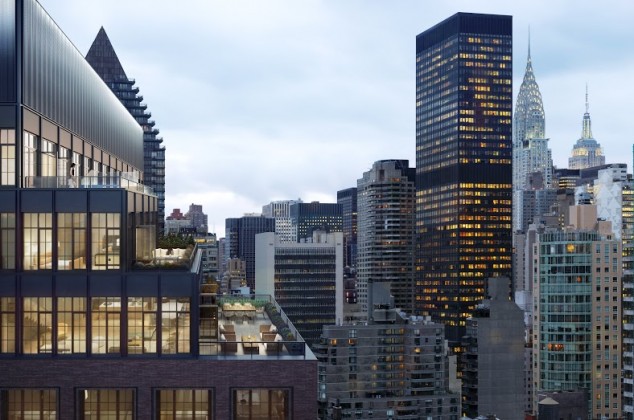 In this issue:
– A New Place on Sutton
– Modern Church Lets the Sun Shine In
– Halletts Point on the High-Rise
– New Gateway to the Garden
– Believing in the Benefits of Beekeeping

A New Place on Sutton
The Sutton, a 30-story, 194,201-square-foot condo, is rising at 959 First Avenue in Sutton Place, a tony neighborhood mostly dominated by low-rise walk-ups. The design, by Incorporated Architecture & Design, draws inspiration from some of the surrounding area’s grand luxury buildings and from its industrial past. The project consists of 113 condo residences, ranging from the smallest studio at 438 square feet to a 3,503-square-foot, four-bedroom penthouse. The black metal and glass façades on the building’s simplex, duplex, and triplex penthouses echo the terraced set-backs on Paul Rudolph‘s 23 Beekman Place several blocks to the south. The MEP is situated behind a black, back-lit screen above the penthouses. As with many new luxury residential buildings, this one includes a children’s playroom, fitness center, residents’ lounge, and a private garden. Most recently a vacant lot, the site was once occupied by a five-story building. The project is being developed by Toll Brothers City Living, and Goldstein Hill & West Architects is the architect-of-record.

Modern Church Lets the Sun Shine In
Construction is currently underway on the new 19,000-square-foot, three-story Letting Christ Be Known Church, designed by Peter F. Gaito & Associates, in the Baychester section of the Bronx. In a departure from traditional church design, the building’s exterior has a Modernist aesthetic with an interplay of solids and voids. The project, however, makes use of stone, brick, stucco, and glass, which appear in the both traditional religious design and that of the buildings in the surrounding neighborhood. The interior experience, which features a reductive aesthetic and contains no extravagant details or ornate religious figures, begins upon entry into a space that serves as a pre- and post-church service meeting room, rather than a typical lobby. This light-filled, double-height space contains two-story glass walls on three sides topped by a 15-foot-diameter skylight, which is visually anchored by two-story-high interior stone walls and an interior garden. The church contains a 500-seat sanctuary on the main floor with multi-purpose spaces, including a banquet hall, a children’s chapel, meeting rooms, and offices located throughout the building. The church is expected to be completed by Summer 2016.

Halletts Point on the High-Rise
Dattner Architects is planning and designing a new high-rise, high-density, resilient, mixed-use development on ten waterfront acres in Astoria, Queens. The city-approved master plan calls for eight residential buildings, retail, a public waterfront esplanade, and a site for a potential K-8 school. Currently in design is a two-tower, 526,000-square-foot building with large, landscaped rooftops, and oriented to maximize views of the East River. The full build-out will be phased and will ultimately include more than 2,000 apartments, 20% of which will be affordable units. The first building in the project, which is being developed by The Durst Organization and Lincoln Equities Group, is expected to be completed in 2017.STUDIO V initially designed the zoning plans for the project. The site is currently occupied by warehouses and a ball field.

New Gateway to the Garden
A newly-restored 1930s McKim, Mead & White brick-and-limestone arch marks the primary point of entry for school groups to the Brooklyn Botanic Garden (BBG) at Flatbush Avenue and Empire Boulevard. In addition to the restoration of the historic arch, Architectural Research Office (ARO) designed a new, approximately 1,000-square-foot parallelogram-shaped gateway building with admissions and comfort station facilities, scheduled to open in early June. The building will be constructed of hand-crafted bricks and features a zinc-sculpted roof. Its environmental footprint is minimized through low-flow water fixtures, clerestory windows, and collected storm water directed into a new garden-wide water catchment system. ARO has also designed the Yellow Magnolia Café and the Yellow Magnolia Canteen, BBG’s new dining facilities. The 300-square-foot canteen kiosk, which opened earlier this month, is constructed from a lightweight stainless-steel mesh. Both structures are inspired by the materiality and proportions of the archway and the modern steel and glass of the Steinhardt Conservatory. The indoor café adjacent to the canteen, featuring a full wall of windows, is scheduled to open in 2016. ARO collaborated with Michael Van Valkenburgh Associates to transform the entryway. The landscape architecture firm has also designed the new Discovery Garden, a full acre that contains three ecosystems – meadow, marsh, and woodland – for children to explore. The garden is set to open in June 2015.

Believing in the Benefits of Beekeeping
Jaklitsch/Gardner Architects is designing the new Mizengo Pinda Asali & Nyuki (which means “bee” in Swahili) Sanctuary, a beekeeping and honey extraction center, plus a public market, in Dodoma, Tanzania. The facilities are organized in a cellular-patterned structure around garden courts, providing a framework for future expansion as well as spaces for informal interaction and learning. The building makes use of sustainable and locally-sourced materials and labor, including mud-fired bricks made on site. The custom brick bond is dimensional, textural, and interwoven, recalling local weaving traditions; the varied arrangements are dictated by the programmatic necessities within each structure to maximize ventilation. The metal roof design accommodates water catchment and is slightly elevated above the enclosed areas to allow passive ventilation and air circulation. Construction is being divided into three core phases. Phase one, scheduled to begin later this year, will include spaces for education, honey harvesting, and a market.

Seven new red, black, and silver painted aluminum sculptures designed bySantiago Calatrava will be installed along the central median of Park Avenuebetween 52nd and 55th Streets, and will be on view from 06.08.15 through 11.01.15. The exhibition is organized by the Marlborough Gallery, the NYC Department of Parks and Recreation, and the Fund for Park Avenue.

The NYC Department of Housing Preservation and Development (HPD) announced that Monadnock Development, in collaboration with Asian Americans for Equality and the social services organization HANAC, has been selected to build One Flushing Square, an affordable housing project with 208 units in a feng shui-oriented project designed by Bernheimer Architecture. The project features a rooftop farm, ground-floor retail, and community space for nonprofits.

As part of the ongoing transformation of the Park Avenue Armory, Herzog & de Meuron is beginning revitalization work on the Veterans Room, one of the few surviving interiors in the world by Louis C. Tiffany and Co., Associated Artists. Once completed in December 2015, the room will be used for performances, recitals, lectures, and a range of other small-scale events.

The Karim Rashid-designed residential project on West 187th Street, known variously as Hap 4 and the Lilak, is scheduled to break ground this month.

Graduate architecture from students from Design Workshop, The New School’s Parsons School of Design pro-bono design-build initiative, will preview the new locker and changing room pavilions at the Sunset Park Recreation Center and Pool that they created for the NYC Department of Parks and Recreation during WantedDesign Brooklyn.

Foamspace by SecondMedia has been selected as the winner of Storefront for Art and Architecture and the New Museum’s 2015 Street Architecture Prize Competition for a temporary outdoor structure for the IDEAS CITY festival. It was selected due to its radical and innovative proposition that reframes architecture beyond form and financial structures beyond consumerism. It will debut on 05.30.15 at the festival.

Jake Gorst’s documentary “Modern Ruin: A World’s Fair Pavilion” tells the story of Philip Johnson’s New York State Pavilion during its glory days. The film will have its world premiere on 05.22.15 at the Queens Theatre in the Park, just steps from the Pavilion. Purchase tickets for the premiere.

“Side by Side,” an exhibition of photographs by Robin Hill curated by Hilary Lewis, explores the similarities and differences between Philip Johnson’s Glass House and Mies van der Rohe’s Farnsworth House. It will be on view from 06.22.15 through 09.20.15 at the Four Seasons Restaurant, and will be open to the public during the restaurant’s regular lunch and dinner hours. The exhibition will travel to the Farnsworth House Visitor Center in Plano, Illinois, at a later date.

The Public Art Fund presents “Please Touch the Art,” a new exhibition by Danish artist Jeppe Hein featuring 18 playful sculptures designed specifically for public interaction at Brooklyn Bridge Park. The show includes three distinct works: Appearing Rooms, a series of “rooms” formed when water shoots up from a gridded base forming “walls” that appear and disappear throughout the day; a large Mirror Labyrinth, featuring equidistantly-spaced vertical elements at varying heights made from mirror-polished stainless steel that multiply the surrounding landscape through myriad reflections; and 16 bright orange-red Modified Social Benches that up-end the idea of a traditional park bench with their unconventional angled, curved, twisted, and bent forms. The exhibition is on view 05.17.15 through 04.17.16 at Brooklyn Bridge Park.

The Municipal Art Society has posted “50 Years of Landmarks,” a timeline of landmarking milestones in New York City.