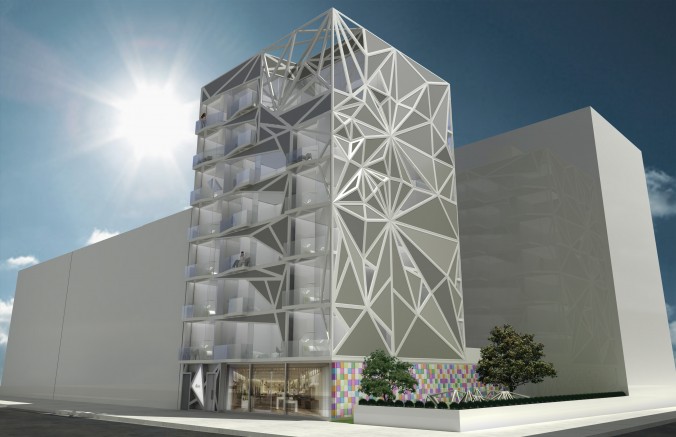 Eran Polack, CEO of development firm HAP Investments, had the good fortune and timing of starting his expansion into Manhattan during the economic crisis.

Now he has his hands full with nine buildings in New York, and has built a portion of Hap’s business in the niche of northern Manhattan.

HAP builds all of its buildings as-of-right, meaning a smoother process for its investors as well. There’s no need to deal with variances and the rezoning process. An as-of-right development complies with all zoning codes in place and does not require discretionary action by the City Planning Commission or Board of Standards and Appeals.

Since building codes are so comprehensive, “in a city like New York, [a building is] already pretty much designed,” Polack said.

But challenging as it is, Polack says the buildings HAP develops are design-driven and add a splash of color to the neighborhoods where they are welcomed.

For many of its design-driven buildings, HAP has collaborated with designer Karim Rashid.

Rashid is a prolific designer with over 3,000 designs in production in 40 countries and over 300 awards. His works include buildings and interiors, product designs for luxury brands, tech products, and brand identity work for companies like Samsung, Hugo Boss, and 3M.

“I think that as designers we tend to clean up the world,” Rashid said via email. When focusing on buildings, Rashid said he tries to create a functional but poetic experience. “Our lives are elevated when we experience beauty, comfort, luxury, performance, and utility, seamlessly together.”

Rashid designed three of HAP’s buildings in Manhattan. One of the buildings, “HAP 6 Diamond” in East Harlem, is inspired by elements from Central Park, the diamond industry, Madison Avenue, and the way the light reflects on Manhattan’s skyline. It’s a multifaceted building filled with colorful modern interiors. The team worked hard to ensure modularity and economies of scale as well, Rashid said.

Another building, HAP 3, was developed for first-time homebuyers in rapidly developing northern Manhattan. It mimics the brick of the surrounding buildings, but has floor-to-ceiling windows to meet the expectations of today’s homebuyers.

“I love the larger experiential impact a condo can have on people’s lives,” Rashid said. “I feel that residents will have a great positive human experience that goes beyond just style.”

“Human beings touch an average of 600 objects a day,” Rashid said. “We’re bound to have relationships with these inanimate things … to get to design things, spaces, buildings that people have that kind of relationship or association with—that’s a very big challenge of design.”

“It’s a beautiful thing for a designer,” Rashid said.

Design has, for years, remained the topic of conversation in only small, insular circles, Rashid said. “I have worked hard for the last 20 years trying to make design a public subject.”

Rashid is able to bring these unique designs to the properties in a way that allows units to go for as low as $300,000 rather than $1 million, Polack said, which is important because they want to provide more reasonably priced housing for people who work and want to live in Manhattan.

Building as-of-right is a benefit to the community as well, Polack says. Not all neighborhoods would mesh well with a building of colorful balconies or a fractal glass building, and HAP is aware of that.

For example, HAP 7 in Washington Heights sits on a site that Quadriad had planned to develop a large residential tower on. The zoning allows for a seven story building, and the community board and residents had been against the tower.

“We were offered to keep working on that rezoning, and we didn’t want to go with that,” Polack said. “We’re trying to do what the community thinks we should do.”

HAP was founded by longtime investment professionals and friends Polack, Amir Hasid, and Nir Amsel in Israel, with each bringing global real estate experience to the table.

“When we came, the good thing was that the prices of these sites were great—we could just buy sites, build as-of-right, and there [were] no issues,” Polack said. “Today, prices are increasing, land is more expensive, and it’s harder to find land to build as-of-right. It’s more difficult.”

As land and construction prices rise, so does the trend of high-end luxury units.

HAP recently purchased a site in Chelsea, where they will employ a different strategy, branching away from their niche business of reasonably priced homes in transitional neighborhoods. It’ll be a high-end building, but they haven’t decided on a designer or architect yet.

Manhattan will keep HAP busy for the next few years, Polack said, as they continue to look for sites in areas with easy access to Midtown.

After that, HAP expects to expand to other cities in the United States and worldwide.

But northern Manhattan will remain the core business for some time. “We think that the city is going to move north,” Polack said. “There is more building that can be done there, bigger buildings … prices are still reasonable. This is why I think there is work there for the next 20–30 years.”